Inle Lake is one of Myanmar’s most interesting and popular tourist attractions. Before going there I (Tanja) was skeptical, because I have seen many beautiful lakes in Austria and Berlin and frankly I have become a bit of a lake snob. So I was pleasantly surprised to be very wrong this time. In my head I profusely apologize to the spirits of Inle lake. It is absolutely amazing and should not be missed whenever visiting Myanmar!

It is not just the beautiful and serene atmosphere of the misty lake nestled among a pretty landscape of hills, but also the life on and around the lake that is spectacular. The people living on the lake belong to the Intha ethnic minority, while the surrounding villages are home to many other tribes, such as the Pa-O, Danu or Palaung.

As a visitor you get to jet around the lake at sunset or sunrise in one of the teak boats covered in black lacquer coating. The lacquer paint has to be redone every year, but the boat can be used several decades. One boat takes two builders about two months to finish, the wood from three teak trees (there are not iron parts in the boat) and will cost more than 2,000$. Therefore most fishermen and locals actually row around in much smaller and cheaper canoes, also made from teak.

In low waters the acrobatic fishermen on the lake use cone-shaped bamboo frames and nets to trap fish and spear them. In deeper waters they use nets. The fishermen are a photographer’s dream because they balance precariously on their canoes and row with only one foot. Some of the fishermen do “demonstrations” for tourists at sunrise and sunset so you are pretty likely to get a good shot.

The villages around the lake specialise in different crafts. In some villages people make rice crackers, in others a famous tofu from split yellow peas, in yet others they dye cloth, run weaving workshops, roll cheeroot cigarettes, work as silversmiths, grow vegetables, make their own noodles, go fishing or build boats.

The entire lake is separated into different trades, all of which you can visit as a tourist. While a lot of the workshops have been geared to tourists (some even take VISA which is a big exception in Myanmar at the moment) you do not have to buy anything. We felt the people were also quite happy to simply explain their trade. 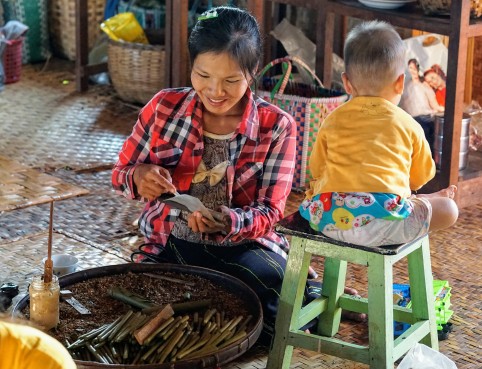 The weavers on the lake had come up with a rather ingenious way to make cloth on the lake. They use lotus stem fibres to make a yarn, which is a slow and long process. For this reason the cloth they produce is very, very expensive, but unique to Inle Lake. The thread feels a little like coarse linen. In the different workshops you can see the weaving in action.

Finally, you can visit colourful markets where the tribes people from the hills come to sell their produce. The markets around the large lake rotate in a five day pattern so the villagers from around the lake as well as from the surrounding hills do not all have to go to the same place. Some of the villagers walk for 4-5 hours to sell their wares on market day. This includes for example very old ladies selling dried chillies.