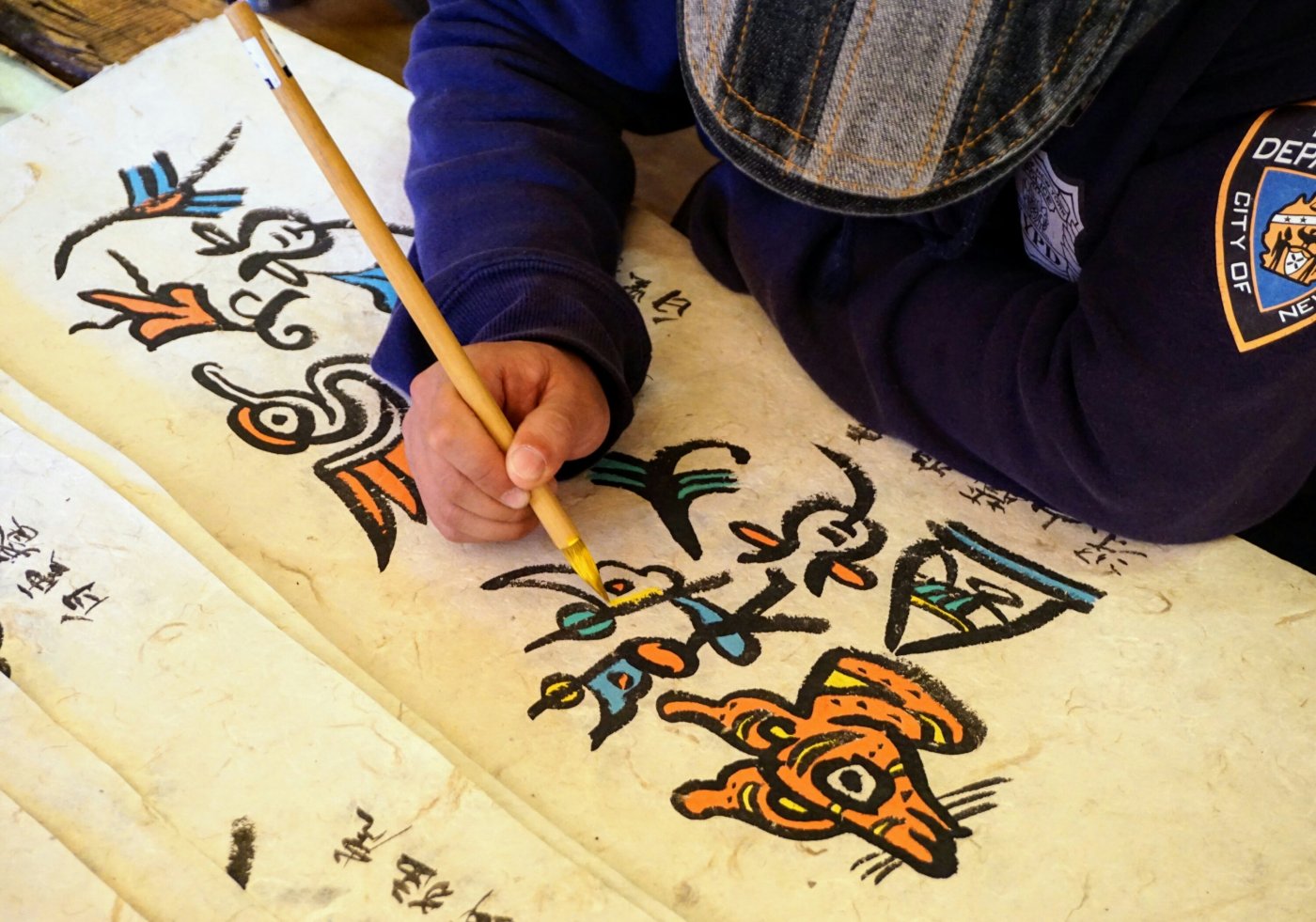 If you travel to north-western Yunnan you can’t miss the Naxi (Nakhi), one of the 55 officially recognized minorities in China with a population of about 320.000. We tried to understand as much as possible about them and were amazed by the various truly interesting aspects of this people! In this post we want to highlight a few including their script, art, matriachial society as well as Joseph Rock, an Austrian-American botanist who studied the Naxi in depth. We have never heard of him before, but people here all know where Austria is.

The Dongba script uses pictographic glyphs and was developed as early as the 7th century. Here in north-western Yunnan you find it everywhere. Even road signs usually are in Chinese, English and Dongba. We especially found the calligraphy to be very aesthetic!

Below you can see a local scholar artist painting such beautiful glyphs. We were told that nowadays only a couple of hundred Naxi Dongba scholars are still capable of painting this style:

In one of the local restaurants in Baisha we found this beautiful calligraphy:

A local halal restaurant where you can find the Dongba glyphs on their sign:

We were also amazed by the intricate silk embroidery that is produced by some Naxi in a small village called Baisha near Lijiang. They make these pieces of art using the thinnest silk threads! It is hard to describe this in a post but the embroideries seemed to glow with spectacular strength! Below is an amazing example, some of the larger ones take several people more than a year to complete! 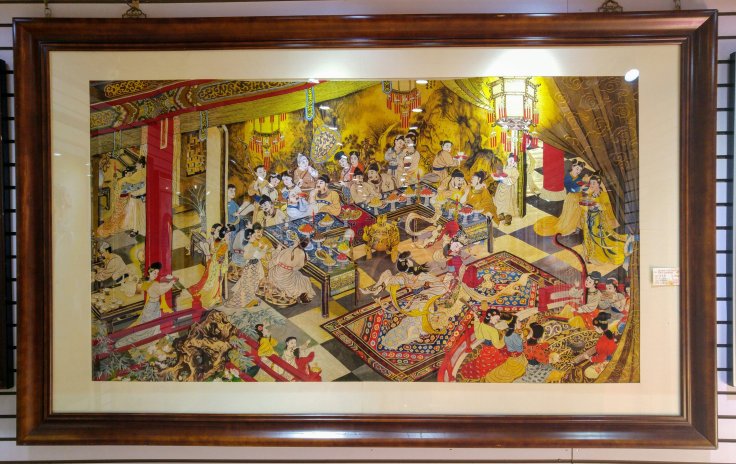 A local lady working on a piece depicting beautifully colored fish. She is currently preparing for a competition where she has to complete the last two fish. 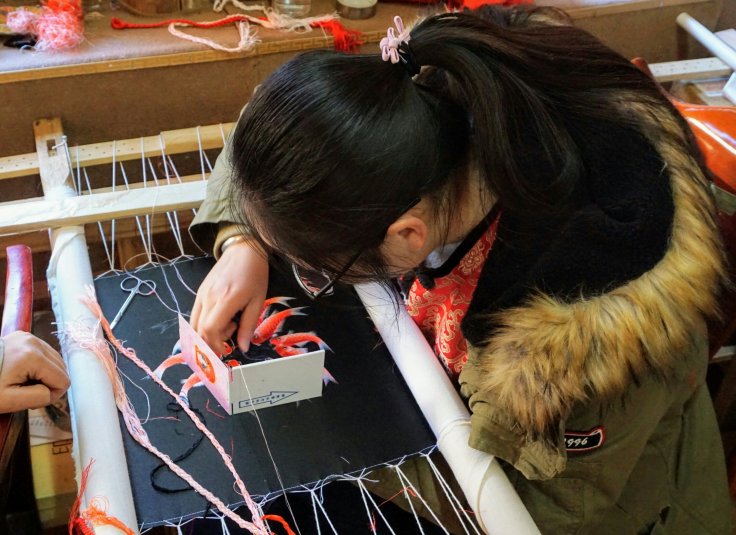 The art of embroidery and writing were almost lost during the tumultous 20th century in China. Nowadays the central government is trying to support local craftsmanship a little to preserve these special cultures. However, both Naxi embroidery and Dongba writing take a lot of time and dedication to learn, so it is hard to find young students, we were told.

The Naxi are traditionslly to a large part a matriarchal society. Women inherit the family’s wealth. After being initiated as a women at the age if 13, women may then choose to take lovers from men within their tribe. They seem to be able to have as many lovers as they please over their lifetime.

Since children always remain in the mother’s care, sometimes the father plays little role in the upbringing. In some cases, the father’s identity is not even known. Instead, the male’s childrearing responsibilities remain in his own matrilineal household.

You can find more information here. We don’t know to what extend this is still the case today, though. In any case, whe. We stayed at Naxi-owned guest houses, it was always the women who dealt with us. Below, the Naxi-owner of a guest house in Yunnan. She was so nice! 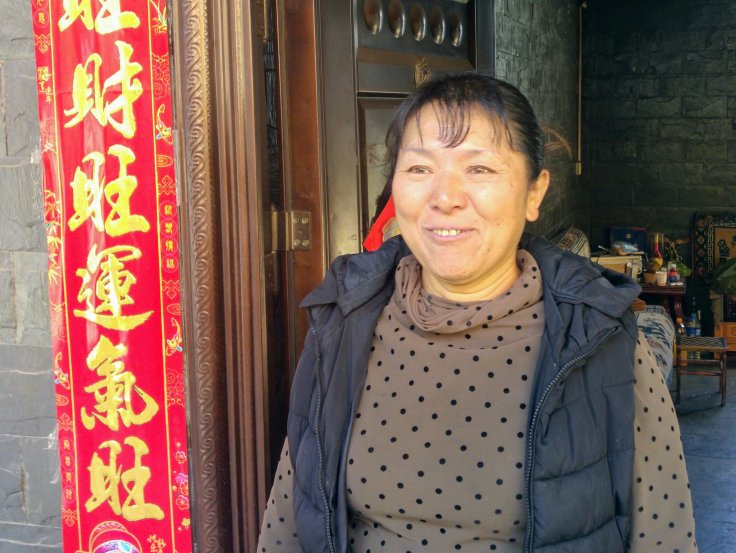 Since there are comparatively few Austrians in this world, we were very intrigued to find out (from the Lonely Planet) that an Austrian explorer played a big role in documenting Naxi language and culture! Joseph Rock was born in Vienna in 1884 and emmigrated to the US while he was still young. He moved to Hawaii and became an expert on its local flora. After about 1910 he then spent a lot of time in Yunnan, where he studied and documented various elements of Naxi culture. For example, he was the first to publish a Naxi – English dictionary! Below is a picture of a sign about this cool guy in Baisha, Yunnan: